Montessori Articles » Montessori How To » How children learn through the senses 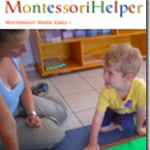 No one can say that man creates artistic products out of nothing. What is called creation is in reality a composition, a construction raised upon a primitive material of the mind, which must be collected from the environment by means of the senses. This is the general principle summed up in the ancient axiom: “Nihil est in intellectu quod prius non fuerit in sensa” (There is nothing in the intellect which was not first in the senses).

We are unable to “imagine” things which…do not actually present themselves to our senses; even language would be lacking to us to explain things lying beyond those customary limits by which our consciousness is bounded.

Those born blind and deaf can form no definite idea of sensations they have never been able to perceive. It is well known that persons blind from their birth imagine colors by comparing them to sounds: for instance, they imagine red as the sound of a trumpet, blue as the sweet music of the violin. The deaf, when they read descriptions of delicious music, imagine the classic beauty of a painted picture. The temperaments of poets and artists are pre-eminently sensorial.

And all the senses do not contribute in equal measure to give a type to the individual imagination; but certain senses are often predominant. Musicians are auditive, and are inclined to describe the world from the sounds it conveys to them; the warbling of the nightingale in the silence of a wood; the patter of the rain in the solitude of the country-side, may be as springs of inspiration for great musical composers; and some of them, describing a tract of country, will dwell only on its silences and noises. Others again, whose susceptibilities are predominantly visual, are impressed by the forms and colors of things. Or it may be the motion, the flexuosity, the impetus of things; the tactile impressions of softness and harshness, which make up the descriptive content of imaginative types in whom the tactile and muscular sensations predominate.

Montessori Sensorial Activities are the key to childhood development as they develop the imagination through the senses, and ultimately are a basis for creativity ….which is vital for managing and adapting to an ever advancing modern world.

One Response to “How children learn through the senses”